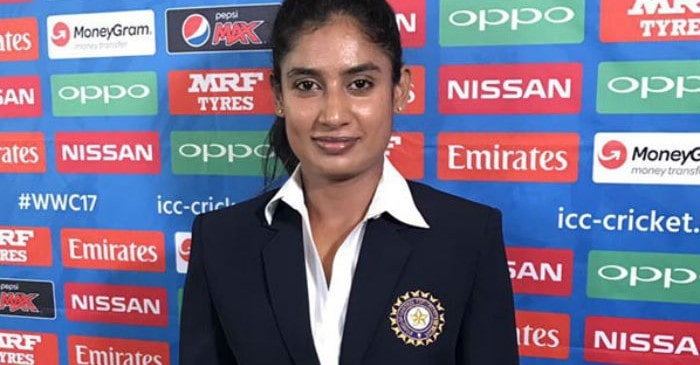 India women’s ODI skipper Mithali Raj is broadly regarded as one of the greatest female cricketers in the world. When Mithali led ‘Women in Blue’ in the ICC Women’s Championship ODI series game against England, she went past Charlotte Edwards’ record of 191 appearances and became the most capped player in the format.

Not only this, but Mithali is also the leading run-getters in the one-day format. So far, the Jodhpur-born cricketer has played 209 ODIs for Team India, in which she has accumulated 6888 runs at a breathtaking average of 50.64 with 7 hundreds and 63 half-centuries.

Under Mithali’s leadership, India reached the final of the 2017 World Cup final but lost to hosts England. However, she is confident about her captaincy. Mithali is currently focussing on winning the World Cup next year and wants to finish her glorious career at the pinnacle.

“In 2013, when India hosted the world cup, we didn’t even qualify for the super six stage. I was hurt and quite disappointed,” said Mithali on Star Sports 1 Telugu show ‘Girl Power-Sarileru Manakevvaru’.

“I thought let me give a try in the 2017 World Cup. Then I really worked hard for that World Cup. As a player, as a captain, I did a lot of homework. I thought when we were in the finals, if we win the finals, then I will retire.

“After playing for so many years, probably I had everything, except that one World Cup. In 2021 again I am going to give another try, hopefully with everybody’s wishes and God willing we should crack it,” she added.

“Honestly cricket happened to me. It didn’t come by choice. I didn’t choose to get into cricket. You can see, my teammates, those who have different stories, like they played with their brothers and some of them were inspired by their brothers. They played in the streets.

“But (for me) it was nothing like that. My dad took me to the academy there whatever transpired, and I was straight away into a full-fledged academy for girls. I was too young to make a choice. If at that time somebody could ask a 10-year-old Mithali, what you want to become, I would have said that I wanted to become an IAS officer. Not a sportsperson, not a dancer. I always felt I had it in me to be an IAS officer,” Mithali revealed.

Mithali also expressed that if women’s cricket had come under BCCI at the right time, a lot of talented players might not have to look for other professions.

“Women’s cricket came under BCCI at the time of 2006-07. I feel if it had happened five years before, it would have been better. Many talented players at that time, because of lack of money, lack of financial stability through this game, they had to shift to different fields.

“After turning 23-24, parents will ask what is next? So, being a women cricketer what can you tell parents? I don’t earn money; I am playing for passion? Nobody will buy it. Because of that reason, a lot of talented people, they had to let go their profession (cricket). So, at that time if BCCI was there, they would have added an extended career, and we would have more pool of players in women’s cricket,” Mithali signed-off.