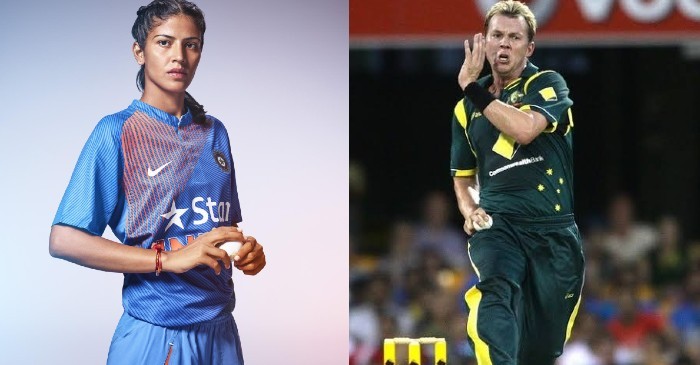 Sharma also shared the new ball with legendary fast bowler Jhulan Goswami. The Hazaribagh-born has made 29 international appearances for the country where she scalped 26 wickets overall.

In a recent interaction, Sharma opened up on her cricketing journey and claimed that she tried to imitate former Australian pacer Brett Lee’s bowling action.

“When I used to play with my brothers and friends in my colony, I was always asked to bowl. I hardly got a chance to bat. So, maybe it was bowling that came naturally to me. And yes, from quite a young age, I used to like watching Brett Lee bowl. I tried to imitate his action but to no avail. I also looked up to Jhulan and wanted to emulate her action, but it was too good for me, I guess,” Sharma told Female cricket.

Sharma was part of the lineup when India last played a Test match, back in 2014. The Indian women’s team won the match by defeating hosts England. In that match, India fielded with as many as eight debutants, including Shubhlakshmi.

“I vividly remember that Test match which we played against England in 2014. There were eight debutants and I was one of them. When my name was announced in the playing XI, I was so excited that as if I was making my India debut again. The cherry on the cake was we won the game. Winning a Test match against England in its own backyard was a great feat,” she added.

Today, the women’s brigade enjoys a massive following after their impressive 2017 Women’s ODI World Cup campaign. Sharma was then asked how the multilateral event, held in England, changed the perception of women’s cricket in India.

“Yes, I feel there are a few changes in the perception of women’s cricket. For instance, there are many new cricket coaching academies for girls that have come up in Kolkata. Also, people have started following women’s cricket more since 2017 and some of our women cricketers have become household names,” Sharma concluded.