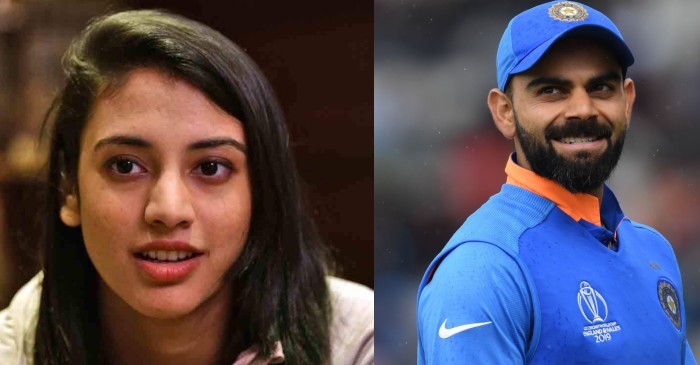 Indian batswoman Smriti Mandhana is acknowledged as one of the best talents in women’s cricket. The left-handed batter made her international debut in 2013. Smriti is also the first Indian woman to smash centuries in SENA (South Africa, England, New Zealand, and Australia) nations.

Smriti has so far appeared in 51 ODIs and 75 T20Is, amassing 2,025 and 1,716 runs, respectively. The explosive opener has scored four centuries in the 50-over format. Apart from this, she is also the fastest Indian women cricketer to complete 2,000 ODI runs. Smriti took only 51 innings to achieve the magnificent milestone.

Currently, just like the rest of women cricketers, Smriti is also hoping for the resumption of women cricket. Meanwhile, she gave an interview to Indian Express, where the India batswoman said that she hopes to finish games for India like Virat Kohli in the men’s team does. Smriti heaped praises for Kohli stating that the consistency of Indian men’s team skipper is quite inspirational.

“I am happy being Smriti Mandhana of women’s team but the kind of batting he (Kohli) does and the way he wins matches for India, It’s very inspirational. I would try and take the way he finishes the games. I would love doing that for India. It’s unrealistic to have the kind of consistency he has,” said Smriti.

The Mumbaikar also recalled her early days when she used to play the captivating game with his brother Shravan Mandhana. Smriti revealed that more than herself, playing for India was her family’s dream.

“As a kid, I used to go and play with my brother (Shravan Mandhana). I used to copy him and bat with him. That’s how it all began. I chose cricket as my career when I was 15 or 16 when I scored a century for Maharashtra. More than my dream, my family dreamed that I play for India, and they always supported me,” Smriti added.

Smriti has won quite a few awards in her mesmerising cricket career. In June 2018, she was named as the Best Women’s International Cricketer by the BCCI. In the last month of the same year, the International Cricket Council (ICC) bestowed her with the Rachael Heyhoe-Flint Award for the best female cricketer of the year.