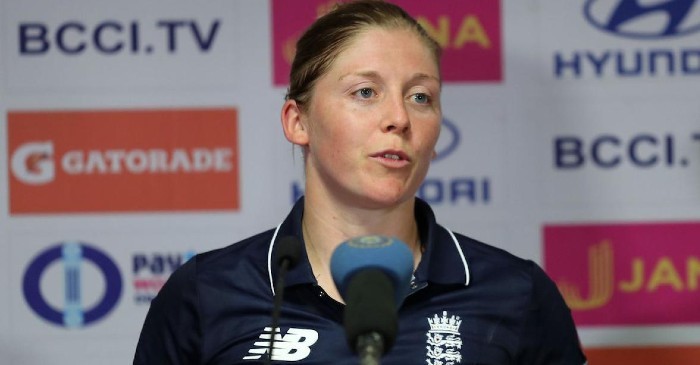 The captain of England’s women’s cricket team, Heather Knight, has expressed her disappointment after the cancellation of the 2021 ICC ODI World Cup in New Zealand.

On August 7, the International Cricket Council (ICC) decided to postpone the showpiece event for Women’s cricket, pushing it one year further to 2020.

However, Knight lamented ICC’s decision to postpone the multilateral ODI tournament and claimed that the event could have been ‘feasible’ in New Zealand next year.

Also, the England skipper took a sly dig at the apex cricketing body for putting women’s cricket on back-burner and suggested that there wasn’t much to look forward to with the postponement of the tournament.

“Pretty gutted to be honest. I know tough decisions have to be made right now and it would have taken a lot of work (and $$), but it was feasible in NZ. Hopefully, it is not an excuse for boards to put women’s cricket on the back burner for the next 12 months with no WC to prepare for,” Knight tweeted.

According to ICC, the format of the tournament will not be changed due to the postponement. As many as five teams already qualified for the coveted championship.

The rest of the teams were scheduled to face-off in the qualifiers this year in July, to book their berth in the World Cup. The ICC Women’s World Cup Qualifiers was slated to be hosted in Sri Lanka in July which was cancelled due to COVID-19 outbreak.

“We have taken the decision to move the ICC Women’s Cricket World Cup to give players from every competing nation. The best opportunity to be ready for the world’s biggest stage and there is still a global qualifier to complete to decide the final three teams,” ICC Chief Executive Manu Sawhney stated earlier.