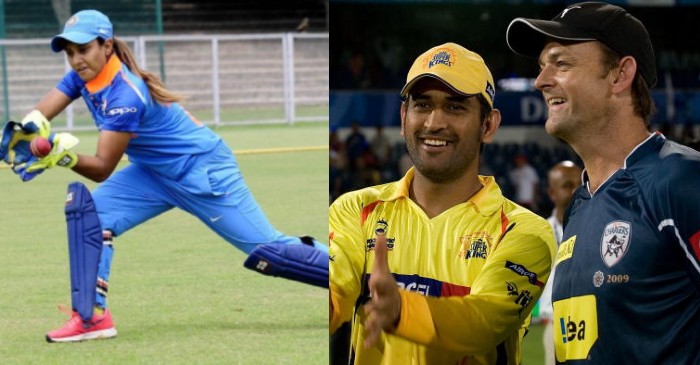 When it comes to explosive wicket keeping-batsmen, there have been none better than Adam Gilchrist and MS Dhoni.

Gilchrist was renowned for pyrotechnics at the top, facing the new ball, while Dhoni is regarded as one of the best finishers of the game.

For a budding wicketkeeper-batsman, there are no better idols at their disposal than Dhoni and Gilchrist.

Same was the case with the wicketkeeper of India’s women’s team Taniya Bhatia. The Chandigarh born grew up drawing inspiration from Dhoni but also had a special place for Gilchrist.

“MS is a big inspiration to me because people, you know, sometimes they say that they see a glimpse of MS in me. There is no point of comparison because I have always looked up to him, I am a huge fan of his hand-eye coordination. But I think it feels great. I mean, it motivates me to work harder. But since childhood, I think it’s Adam Gilchrist who has been my inspiration. And I have met him,” Bhatia told Times Now.

Bhatia, who kept behind the stumps neatly during the 2020 Women’s T20 World Cup in Australia, recalled when Gilchrist voiced his opinion during the tournament opener against Australia.

“During our first game in the World Cup, I wasn’t aware that he was in the commentary box. Later I got to know. I had previously met him when I was eight or nine. He used to play for Kings XI Punjab, he was practicing. Imagine, he himself came to me and said – hi, how are you? I was shivering but I managed to tell him that even I was a wicketkeeper,” the 22-year-old added.

“I don’t think he realised during the World Cup that I was the same girl who met him during that time. I think he is not aware but I would love to tell him that I met him as an 8-year-old. After the match against Australia, where I was involved in four dismissals, he came to me and appreciated my wicketkeeping. He said – you were really good. He made my day. I can never forget him appreciating my keeping, it was really memorable,” Bhatia concluded.