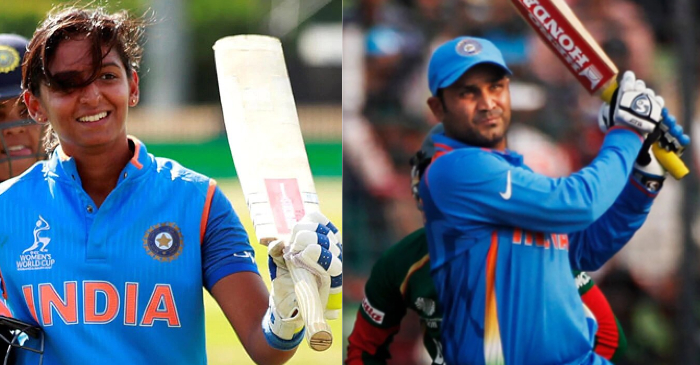 Virender Sehwag’s no-holds-barred assault as an opening batsman, irrespective of what a specific format or a situation demands, was a great asset for the otherwise conservative Indian team in the decades of 2000s. It was something that no viewers have ever seen before.

Even now if a youngster exhibits such fearless tenets, an instant comparison is drawn with Sehwag.

Meanwhile, India’s T20I captain Harmanpreet Kaur has garnered a lot of praises for her ruthless attacking approach as a batter. For many, she is the closest one can get to Sehwag.

In a profoundly fitting way, Harmanpreet has revealed in a recent interview that Sehwag was indeed the player she idolized while growing up.

The Indian all-rounder remarked that she used to copy Sehwag’s shots and practised it relentlessly to reach the same level of perfection as her idol.

“I used to copy his [Sehwag] shots while batting at the ground. His cut shot was so lethal, the ball would go for a boundary or a six if he was offered width. I prepared myself accordingly for my game. He might not know this but I practiced a lot because of him, it was my dream to become like him,” Harmanpreet remarked while speaking to Harsha Bhogle on Cricbuzz.

“So when kids come to me and tell me they want to become like me, I can feel that because I have gone through the same journey. I get happiness in helping them in any manner because when I was going through these things, I was clueless about where I wanted to go but I was determined to play,” she added.

Harmanpreet further reminisced about younger days when she once tried reaching out to Sehwag for some suggestions related to her game.

“For the first time, I had written him a text which read – Sir, I want to talk to you, if you have time please talk. You won’t believe, he called back within two seconds. I was surprised as I thought he might not read the message or check it after 10 days. He called back and it did not look like he was in a hurry to answer my queries,” the 31-years-old asserted.

“He gave me plenty of time, patiently listened to all my questions, and gave me advice. My respect for him increased after that, as earlier, we used to just dream about our favourite cricketers – to meet them and take a selfie with them. But to talk to him over the phone and that too him calling back, I think it’s very rare,” concluded Harmanpreet.