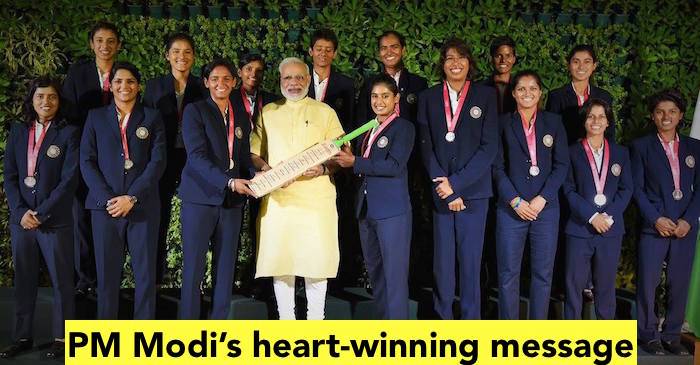 Indian Prime Minister Narendra Modi has heaped praise on the Mithali Raj & Co. for their stellar performance in the recently-concluded ICC Women’s World Cup in England, saying despite their loss in the final, they won the hearts of 125 crore Indians.

The Women in Blue won many hearts during their stunning run at the World Cup. They stormed into the finals of the tournament defeating the champion teams like Australia and New Zealand.

However, Mithali girls lost the big match at the Lord’s under pressure or due to inexperience in the side.

On July 27, after the return of the Indian squad from England, PM Modi interacted with the players and officials, lauded their performance in New Delhi.

At the occasion, he was also presented with a signed cricket bat by the women’s team. During the 34th edition of the Mann Ki Baat address on Sunday, PM Modi said that the women’s cricket team performed exceedingly well in the World Cup.

“I got a chance to meet them this week only. I spoke to them and was feeling great. But I realised that they had this guilt of not winning the World Cup. They were feeling nervous,” he said.

“But I told them, in this day and age, expectations are raised so much. And then, if our team can’t win some people don’t even respect basic decencies. But, the way India supported the women’s cricket team shows a shift. I am happy how India took pride in the team’s accomplishment.”

“I told them that it was the first time that when our team lost in the finals, 125 crore Indians carried their defeat in the final, on their shoulders, and this was, in fact, their greatest victory. Even though the team could not win the World Cup, they won the hearts of 125 crore Indians,” he added.