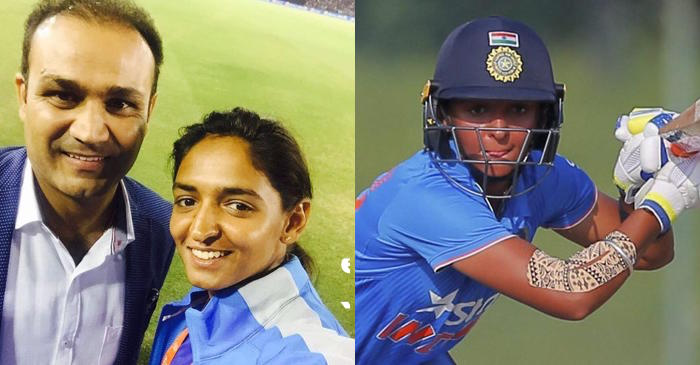 India’s middle-order batter Harmanpreet Kaur who played one of the best innings in the ICC Women’s World Cup history against Australia at Derby, is a big fan of former Indian Men’s opener Virender Sehwag.

Nicknamed as ‘Harry’ by teammates, Harmanpreet played a match-winning unbeaten knock of 171 runs off just 115 balls in the second semi-finals of the Women’s World Cup 2017. She started her innings slowly, but accelerated it soon with an unbelievable strike rate and led her team to a victory. Harmanpreet was also awarded the ‘Player of the Match’ for her crucial knock and scintillating performance.

Speaking to Times of India, the 28-year-old all-rounder has revealed an incident when she underwent a dope Test after the match against Australia.

Harmanpreet’s massive six at Sydney Cricket Ground in 2009 is still the biggest hit in Women’s cricket history. She was just 19 then and hit the ball so hard that the officials of the match asked her to undergo a dope test. She was even asked to send her bat to the laboratory for further checking.

“That six was the turning point. No one believed a girl could hit a ball so high and far. There were apprehensions that I had taken energy-boosting drugs. I underwent a dope test but I came out clean,” Harmanpreet was quoted as saying.