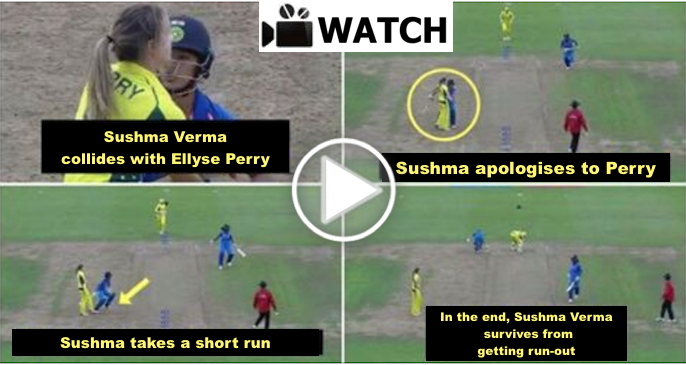 In the league match of the ongoing ICC Women’s World Cup between India and Australia at Briston, Indian wicket-keeper batsman Sushma Verma showed the true ‘Spirit of the game’ after on-field collision with Australian all-rounder Ellyse Perry, while completing a run.

The incident happened in the 49th over of the first innings, when Ellyse Perry’s good length delivery was heaved towards the deep backward square by Sushma Verma. The ball seemed to be going over the boundary line for a six but Nicole Bolton‘s brilliance saved 5 runs for her team.

Meanwhile, Sushma was eyeing two runs and quickly ran towards the non-striker’s end, where she collided with Perry, who was engrossed in looking at the fielder just before the batswoman could complete her run.

At the same moment, Sushma hugged Perry and apologized as she thought it was her mistake, whereas Perry signaled Sushma to complete the run but it was too late for her to react which resulted in Sushma returning back to the striker’s end, taking a short run and saving herself from getting run-out.